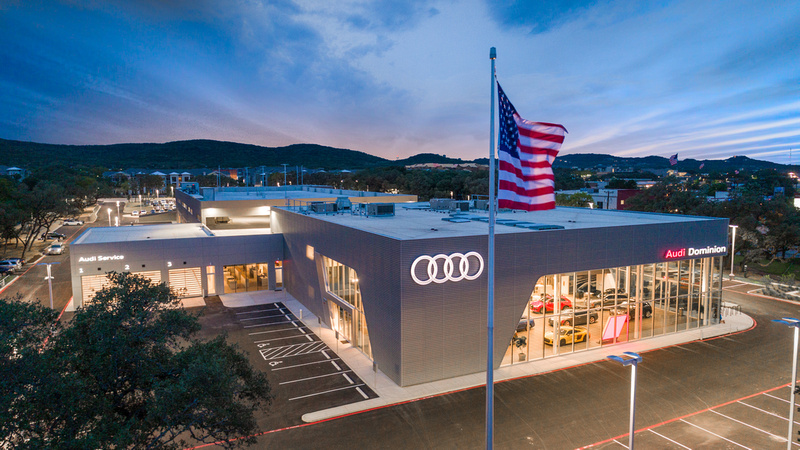 Fossum Studios had the honor of photographing a brand new Cavender Audi Dealership over the course of three sessions. I received some apprapos direction from Rick Cavender and saw some amazing artistry by Malitz Construction — The cone in the corner is a sheetrocking wonder of the world and the concavity of the black 2nd floor balcony is also quite a feat.

The first session was to scope it out, the second for the actual photos and the third to capture the exteriors that were scoped on the first day — redundancy and photographer's instinct were the keystones here. The first session, yielded some great sunrise shots, as the angle of the building required sunrise, so the third session was planned. The second session was to capture interiors once the Audi's were delivered to the showroom floor. However, with weather rolling in that evening and the timing just perfect for a round of twilight exteriors, I rearranged my schedule and shot that evening successfully with the help of some post-production Photoshop work. The third session, as planned I showed up at sunrise, it was drizzling, overcast and the humidity had fogged up the showroom windows...as well as my lenses. (10 minutes in the car with the heater on equalized the temperatures so I could use the Canon lenses). The shots from the 3rd morning session were virtually useless due to the weather, as I had thought they would be.